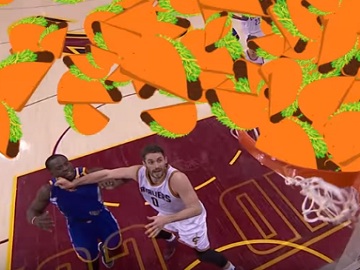 Taco Bell is letting everyone steal a free Doritos Locos Tacos on June 13, from 2 to 6 PM, and highlights this in a short ad, titled “It’s Crunch Time – Steal a Game, Steal a Taco”.

“Good news, America. The Warriors stole game four of the NBA Finals and Taco Bell’s letting everyone steal a Taco. So go at Taco Bell on June 13 to score your free Doritos Locos Tacos from 2 to 6 PM.” – says the voiceover in the 15-second spot.

The deal is part of part of the fast food restaurant’s “Steal a Game, Steal a Taco” giveaway, that’s tied to this year’s NBA Finals, when the visiting Golden State Warriors “stole” a road win from the Cleveland Cavaliers in Game Three, at the Quicken Loans Arena in Cleveland. If you’re planning to take more than one taco, bad news – there is a limit: one taco per person. Doritos Locos, including seasoned beef, iceberg lettuce, and cheddar cheese, uses the nacho chip snack as a taco shell.