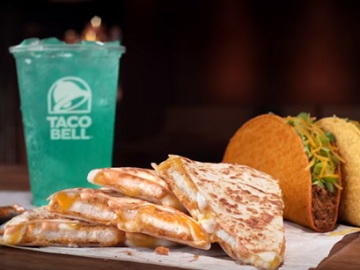 “We took marinated all-white meat chicken and married it with our cheesy quesadilla to create the perfect union.” – the voiceover says in the 30-second spot, titled “A More Perfect Union”. He then introduces the fast-food chain’s new Crispy Chicken Quesadilla, which can be got with a Crunchy Taco or a Nacho Cheese Doritos Locos Taco, and an ice-cold medium drink, for just $5.

“Together at last, but only for a limited time.” – the voiceover also says at the end of the commercial, adding “The new $5 Crispy Chicken Quesadilla Box, only at Taco Bell”. Pricing varies by restaurant. Among Taco Bell’s Combos there are also the $5 Steak Quesarito Box, the $5 Cravings Deal, the $5.99 Doubledilla Combo Steak, the $6.79 Mexican Pizza Combo, the $5.99 Nachos Bellgrande Combo, and more.