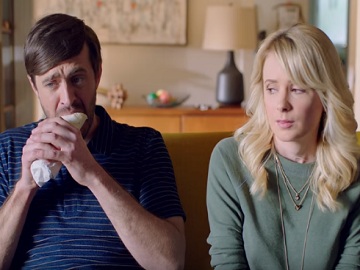 Taco Bell promotes its $1 Beefy Potato-rito in a hilarious new ad, highlighting that it brings some comfort to an otherwise uncomfortable situation.

The 30-second spot, dubbed “Comfort Yourself”, features a couple on a couch, looking at each other, while a male voiceover reveals that she (named Jenny) is breaking up with him (Jason). “It’s pretty uncomfortable.” – he adds, specifying that “Jason is filling the void with seasoned beef, potatoes and warm nacho cheese sauce, bringing some comfort to a very uncomfortable situation.” At this point, while Jason is comforting himself with Taco Bell’s $1 Beefy Potato-rito, the camera pans, revealing that the voiceover is actually a friend of the couple, who’s also holding a Beefy Potato-rito. “You are making this very uncomfortable, Todd!” – Jenny tells him. The latter seems, for a second, willing to hand the Beefy Potato-rito over to her, but when she’s about to grab it, he takes it back, asking “How does that feel, Jenny?”. Her answer is easy to guess: “Not good”.

The spot ends with the voiceover inviting you to “Taste the new $1 Beefy Potato-rito only at Taco Bell”.