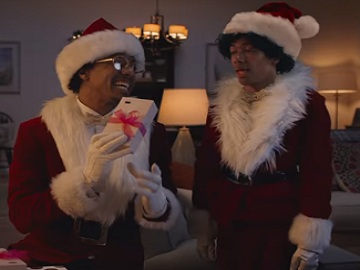 T-Mobile promotes its deal on iPhone, that enables you to get two iPhone 8 for the price of one, in a hilarious new commercial starring Nick Cannon as Santa/Saint Nick.

The 30-second spot, aiming to highlight that “Great things come in twos when you holiday TWOgether at T-Mobile”,
features the rapper/actor dressed in a Santa costume dropping down the chimney into a family’s living room fireplace, followed by a smaller version of himself, that it turns out to be his son. “Take note, son. Number one: T-Mobile gives you two iPhone 8 for the price of one. One person gets an awesome gift and so does the next guy.” – “Dad” Cannon says to his son, who is asked to say, in response, twice, what he believes, namely that this deal makes his dad a wise dude.

“Great things come in twos when you holiday TWOgether at T-Mobile. Right now, buy one iPhone 8, get one on us.” – the voiceover says at the end of the commercial.

The song used in the ad is the holiday-themed hot rod song “Little Saint Nick”, performed by the professional a cappella group Straight No Chaser and included on their 2011 album, “Holiday Spirits”.