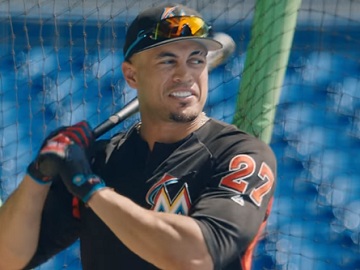 T-Mobile highlights, in one of its latest ads, starring Giancarlo Stanton, that you can stream, post and share the T-Mobile Home Run Derby from almost anywhere.

The 30-second spot, promoting the Home Run Derby and titled “The Nickname”, features a fan watching the left fielder and right fielder for the Miami Marlins as he practices his batting and trying to guess his nickname.

“What about the Derby Destroyer or For Bagger with swagger?” – asks the guy, annoying Stanton, who asks him what he’s doing there. The fan answers that T-Mobile is all unlimited so he got unlimited access to the T-Mobile Home Run Derby and continues the guessing about the player’s nickname. When he suggests that the nickname might be “The Derby Darling”, Stanton makes him stop his “guessing game”, telling him that nobody calls him “darling”. “Duly noted.” – replies the guy, a little bit frightened.

“We can’t really give every fan access to the field, but we can give you America’s best unlimited network, T-Mobile.” – says the voiceover at the end of the commercial.