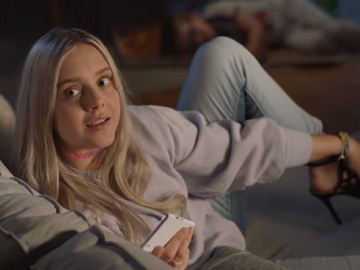 T-Mobile promotes, in a new ad, its deal on 4 lines of unlimited data for just $40 a month, with auto pay, and $0 down on the hottest smartphone brands.

The 30-second spot features a married couple coming home after a night out and finding the babysitter they hired, a young blonde girl (played by actress Casimere Jollette) sitting on the couch, while their little girl is cutting the dog’s fur. Asked what she’d doing, she answers she’s “babysitting” and asks for $50, explaining that it was $30 before her fees, like “the dog sitting” and “the rummage through the closet fee”. Hearing this, the kid’s father can’t help but ask himself “Who is she? Verizon?”. The mother asks the teenage girl if the heels she’s wearing are hers and the latter confirms, making her feel uncomfortable with the mention “we are the same size… in shoes”.
“With T-Mobile, taxes and fees are already included.” – the voiceover says at the end of the spot, urging viewers to “get 4 lines of unlimited data for just $40 each and now $0 down on the hottest smartphone brands, like Samsung Galaxy”.

The song playing at the end of the ad is “I’m Stuck” by Noah Cyrus, the teenage daughter of Billy Ray Cyrus and little sister of Miley Cyrus, from her debut album, NC-17, released this year.

Casimere Jollette stars as Linz in the drama series “Guidance” alongside Michelle Trachtenberg and as Brie in the sci-fi drama Dimension 404. She also appeared in Divergent as Claire Sutron, in Sweet 16 as Angelina, and other TV series in minor roles.