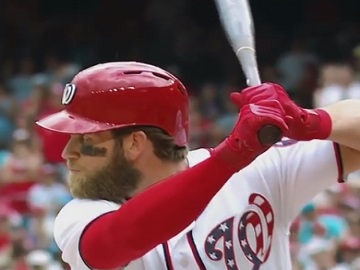 T-Mobile continues its ad campaign aiming to highlight that it brings you “the nation’s most advanced LTE network” with a new commercial, starring Bryce Harper.

“Some say a walk-off is unexpected. But not for Bryce Harper. Because this moment took years of sacrifice, hours in the cage, and a lifetime between the lines. To dominate the field, you got to put in the work.” – the voiceover says in the 30-second spot, featuring the right fielder for the Washington Nationals training hard to achieve the results that made him famous. “At T-Mobile, we push the limits to fill the nation’s most advanced LTE network, that just keeps getting faster.” – he adds as the spot ends.

“Unexpected? Not to us.” – the voiceover says eventually, while Harper is seen throwing away his bat. The commercial, ending with the tagline “T-Mobile – America’s Best Unlimited Network”, also informs that, on all T-Mobile plans, if congested, the small fraction of customers using 50GB/month may notice reduced speeds due to prioritization.