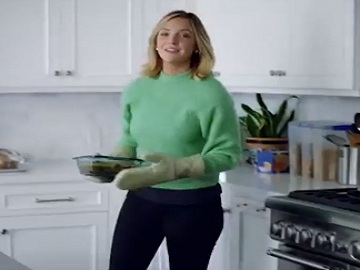 Swiffer has launched a new ad campaign, called “The Art of Adulting”, which stars Abby Elliott as the expert giving
“adulting tips”.

In one of the spots, the 30-year-old actress is seen eating corn directly from the bag and salsa dip directly from the jar, while in the background she is heard saying that she actually used to think that was dinner. But then something changed: she discovered adulting. “Now, I don’t have to wait till I’m hungry to eat whatever’s front of me. I plan my meals. I cook. It feels good.” – she says after taking out of the oven a tray. She immediately takes a bite to see how the meal tastes, but finds out that’s too hot and starts grabbing a snack from the open bag left on the counter, while cleaning the kitchen with Swiffer WetJet. “What? Baby steps.” – she says looking at the camera as if someone had draw her attention regarding her habit. “I mean, adult steps.” – she adds.

The commercial ends with the tagline “Adulting is hard. Swiffer makes it easy”.