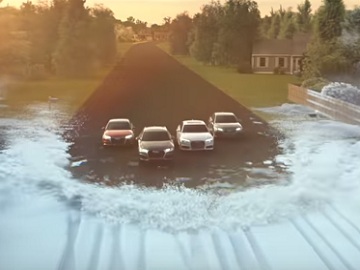 Audi promotes, in a series of new ads, the Summer of Audi Sales Event and urges you to visit your local Audi dealership now for exceptional offers through August 31, 2017.

One of the 30-second spots, titled “Melt”, features a young boy being chased by two peers willing to hit him with snowballs. The protagonist, dressed in summer clothes, is shown running on a snow covered sidewalk and tumbling in a garden, where he’s caught by the bullies, who ask him if he has any last words. At this point, four Audi vehicles speeding down the street make all the snow melt, including the snowballs from their hands. Taking out a plastic ball from his backpack, the boy gets ready to throw it, telling Danny, one of the bullies, that it’s karma.