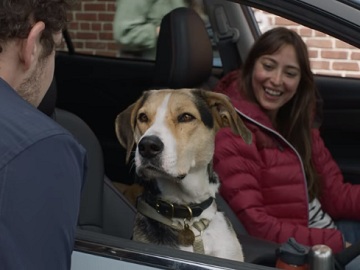 Subaru showcases the 2018 Crosstrek in a heartwarming commercial, aiming to highlight that “You can never have too many faithful companions”.

The spot, done by agency Carmichael Lynch and titled “Welcome to the Pack”, features a young man going on a weekend roadtrip with his new girlfriend and her faithful, but very skeptical, old dog, Butch, who doesn’t seem to like him at all. “I think you guys are going to be best friends.” – the woman says, while driving her Subaru Crosstrek, to her boyfriend, referring to him and Butch.

After multiple attempts to win the dog’s affection, the guy – who receives, in response, only growls, loses his hope. However, he is eventually welcomed to the pack by Butch thanks to a small gesture, proof that he is really affectionate with the woman: he puts a jacket over her shoulders on a cold evening.

The song used in the ad is “Alone” by American bluegrass/folk-rock band Trampled by Turtles, from their 2012 album “Stars and Satellites”.