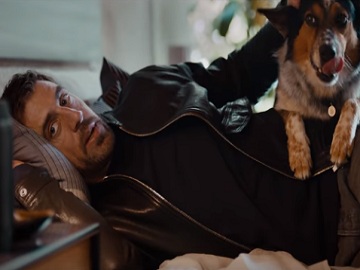 Aaron Rodgers stars in a new commercial for State Farm, together with his dog and his teammate Clay Matthews.

The 30-second spot, titled “Neighbors” and aiming to highlight how much home means to you, begins with Rodgers
and Matthews at the reception of a hotel, being informed that their rooms will be next to each other. While Matthews, who claims Rodgers is his best friend, is happy to have him as a neighbor, even if only for a night, for Rodgers things are not quite the same. He is disturbed by the linebacker, who proves to be nosy and noisy: he knocks at his door to ask if he’s taking all his tiny shampoos, he’s watching TV at too high a volume, and he’s singing (Nelly Furtado’s “I’m Like a Bird”) in the bathroom very loudly. The next morning, the two are seen at the reception again, with Matthews telling his bro he looks rough.

“State Farm knows it’s more than a house. It’s home. So why not give it the protection it deserves?” – the voiceover asks at the end of the spot, while on screen Rodgers is seen coming back home, throwing himself in his bed and asking Alexa to play something relaxing. The song playing is Nelly Furtado’s 2001 single “I’m Like a Bird”, from her first album, “Whoa, Nelly!”, which was nominated for the Grammy Award for Song of the Year and brought the Canadian singer a Grammy Award for Best Female Pop Vocal Performance, making her the first female to win the award for her debut single.