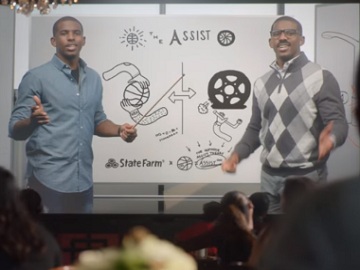 NBA All Star point guard for the Houston Rockets Chris Paul stars as himself and as his imaginary, long-lost twin brother, Cliff Paul, in a new State Farm commercial urging viewers to get an agent that gets them.

“Goodbyes are never easy. But when you’re born to assist, you can’t close one door without first opening another.” – the voiceover says in the 30-second spot, that features a going away party thrown for Chris Paul (who moved from Los Angeles to Houston). “Man, I’ll miss seeing that face every day.” – Chris says, referring to Cliff’s face, that is seen in the audience at Chris’ games. After a short conversation, he learns that Cliff has found for him a new State Farm agent as his “last assist”. Looking at the agent’s business card, he sees that his name is Cole Perez and that his message for Chris is “Born to be your agent!” with the word “your” underlined.

A line on the business card encourages people to get an agent that gets them.

The ad is set to debut on Thursday night, during the Houston Rockets-Cleveland Cavaliers game on TNT.

Paul’s collaboration with State Farm doesn’t include only this commercial, though. He is working with the insurance company to help rebuild libraries and schools in Houston affected by Hurricane Harvey and will hold an eBay auction including autographed artwork, sneakers, jerseys and more, to benefit victims of the hurricane.