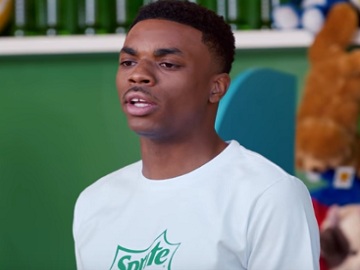 Vince Staples performs alongside a cast of random teenage actors in a new Sprite commercial, promoting the “coolest, crispest and most refreshing” Summer Sprite, in the third installment of Cold Lyric Series.

The spot features the 23-year-old rapper in an amusement park, at a Sprite stand, where people are invited to “Cold
lyrics by hot rappers”. “Win a cool, crips, refreshing lemon-lime Summer Sprite” – says Staples. When a group of teenagers come close, almost unbelievable that Vince Staples is in front of them, the latter knocks down a bunch of skittles, tells them they won and gives them a Summer Sprite can.

The spot ends with the rapper informing the random teenagers that the promotional sign is up above and urging them to read it carefully. “We have an enlarged product. This product is important. Make sure they see that logo. Look into the camera.” – he instructs the teenagers.