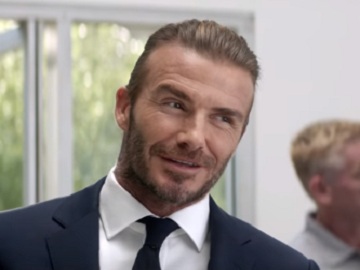 David Beckham returns in a new Sprint commercial that invites viewers to “get the all-new iPhone X on a game-changing Network with Unlimited”.

“Game changer David Beckham changed the psychics of football. He changed the way people dress, smell, and drink.” – the voiceover says in the 30-second spot, referring to the former football player’s own clothing line (the British
heritage menswear brand Kent & Curwen), fragrances (Beyond and Beyond Forever, Classic, The Essence, Instinct, Homme and more – all for men) and drink (Haig Club – a new Single Grain Scotch Whisky). “When he changed his hair, it changed your hair. He even changed the term “dad bod”. And when the all-new iPhone X changed the game, he knew it deserved to be on a game-changing network with unlimited that could support all of its awesomeness. Sprint!” – the voiceover, who reveals to be Paul Marcarelli (best known as the “Test Man” character in commercials for Verizon Wireless”), adds.

“Can I just change one more thing?” – Beckham asks him as he enters a Sprint store and finds Paul reading this text to a microphone, while wearing some casual clothes. The next shot features Paul dressed in a grey suit, asking Beckham if it’s better. “Works for me!” – he answers.

The commercial ends with another voiceover saying “Because the all-new iPhone X deserves a game-changing Network with Unlimited.