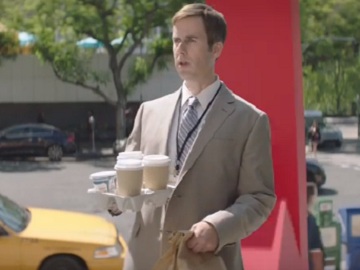 Sprint has released a new ad, urging viewers to switch to Sprint and get unlimited for just $22.50 a month per line for four lines.

The 30-second spot features a man named Doug who gets literally hooked by Verizon – well, only by the V – while he’s looking at the word “unlimited” on some stairs. The man coming to help him get down tells him that “now every network is great, but Sprint doesn’t cost you twice as much”. Doug manages to utter a “Wow” in response before falling to his face and having his cups of coffee spread all over. When his “savior” says “Sweet freedom”, he adds “Works for me”, Sprint’s well-know tagline promoting the company’s Unlimited plan.

“Don’t get hooked by Verizon and let a 1% difference in network reliability cost you twice as much.” – says the voiceover at the end of the spot, urging you to switch to Sprint Unlimited for $22.50 per line for 4 lines.