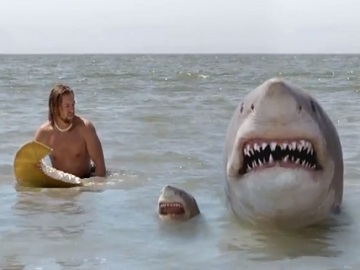 The 30-second spot, titled “Baby Shark”, starts with the same question raised by the voiceover in all the spots part of this campaign (“Baywatch protects the beat, but who protects your wallet?”) and features the Unlimited Lifeguard on his jet ski, talking to a surfer whose surfboard has been bitten by a shark, that’s five feet away from him. “Looks like you’re in trouble!” – says the lifeguard playing Captain Obvious. “Paying way too much for unlimited data”, he adds while the shark is chewing the piece of surfboard. “You should switch to Sprint! That
will save you” – he advises the surfer, who answers “Works for me”. At this point, a baby shark comes out of the water, saying something to the lifeguard, naming him “my friend”.

The spot ends with the voiceover urging viewers to switch to Sprint, while on screen the company’s Unlimited offer, including 4 lines for $22.50 and the 5th line free, is displayed, and to see Baywatch, starring Dwayne Johnson and Zac Efron, now in theaters.