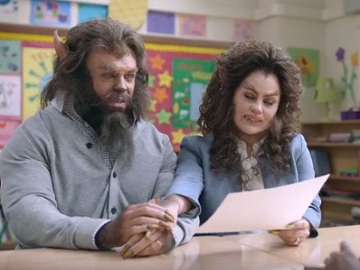 Spectrum continues its “Monsters” ad campaign with a new commercial featuring two werewolves talking to the teacher of their kid.

The spot, dubbed “Parent Teacher Night”, features the couple being shown a drawing their daughter has made. Seeing it, the father tries to excuse themselves, saying they don’t talk “like this” at home, and when the teacher tells him that the drawing is called “Daddy and DIRECTV”, he keeps saying that he wouldn’t say any of those words out loud.

However, he soon proves that he has some anger management issues because of AT&T’s DIRECTV service, which is supposed to be $10/month, but it’s actually “ten times more than they say”, and, moreover, there’s no NFL network.
The teacher puts an end to the conversation by saying she cannot have the respective drawing on the wall. The werewolf dad concludes that “it’s artistically good, though”.

“Misleading offers are evil. Spectrum doesn’t have them.” – the voiceover says at the end of the spot, adding the company’s tagline, “DIRECTV BAD. SPECTRUM GOOD”.