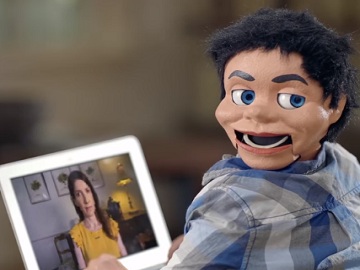 Spectrum continues its Monsters ad campaign with a new commercial, featuring a Mad Scientist and Gary, the ventriloquist’s dummy, who’s been crushing at his place.

Gary, who is seen chatting with a young woman through a face-to-face video call, is asked by the Mad Scientist to go offline because he’s using all the bandwidth. He refuses, saying she’s into him, but the scientist insists, mentioning that he is trying to upload a virus meant to take down the global banking system. At this point, Gary, who’s known for his straightforwardness, cannot help but notice how “useless” the Scientist’s Internet is. “The Phone Company said it would be faster. It never happened.” – the Mad Scientist explains, asking then the dummy to get off and get out of his house, as he’s been there for six weeks.

After hearing their conversation, the woman who was talking to Gary decides to come up with an excuse to immediately disconnect, making him realize he will only see her in his dreams.

The commercial highlights, at the end, through onscreen lines that “Slow Internet is evil.” and “Spectrum is scary fast”. “Phone Company Internet Bad. Spectrum Good.” – the voiceover says.