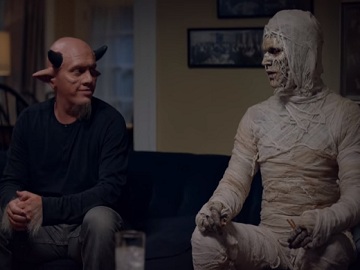 Spectrum continues its “Monsters” ad campaign with a new spot. This time, Death, who’s hosting some of his monstrous friends on a rainy night, tries to distract them with a game of charades, given that his satellite signal was lost because of the rain.

“Movie, third world, stirring, stop mixing.” – the devil says in his attempt of naming the film mimed by the Grim Reaper. “Is it “My idiot friend that has satellite TV that cut out in the rain right in the middle of the game”?” – a living ventriloquist dummy asks sarcastically, upset because he can’t watch the football game anymore. “I think what you’re thinking is “Bitter little man who doesn’t know how to make the best of a bad situation”.” – Death replies sarcastically, as well. The demon, unable to sense the irony in his friends’ words, believes the two are “really good” at this game and mentions he hasn’t heard of any of those movies.”Is there a brain in there or is it just all horny?” – the ventriloquist dummy asks the Devil, who says in response that he doesn’t know because he has never seen inside his head. “And there’s our answer.” – the spooky dummy adds.

The commercial ends with the voiceover saying “TV that can cut in the rain is evil. Spectrum is reliable” and adding the cable provider’s tagline, “Satellite TV Bad. Spectrum Good.”