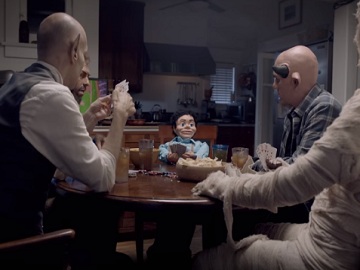 Spectrum has brought back the monsters in a new commercial from creative agency Something Different, highlighting, as always, that “DIRECTV is bad” and “Spectrum is good”.

The 60-second spot, titled “Poker Night” and directed by David Shane, shows the mummy, the werewolf, a creepy dummy and other two monsters playing poker and discussing about how evil it is to sell TV missing the most basic features of TV. It all begins when the werewolf asks the host, a creature with black horns, to pause the game on TV for him. “It’s DIRECTV Now. There’s no DVR. I can’t pause. I can’t rewind it.”, explains the host to the werewolf, who initially lost his cool, believing that he had been refused because of some prejudice against his species.

“Before you ask, there’s no Showtime and a film Network, Red Zone, CBS” – details the host, making the werewolf conclude that “that’s evil” and ask “who sells something like this?”. At this point, the creepy dummy asks the monsters if they want him to “take care of it” for them. Confronted with a “No” as an answer, the dummy insists by saying that “it will be done very professionally”. “What does that even mean?” – asks one of the monsters. “It means what it means” – replies the dummy, making one of them say “You’re freaking me out!”.

The spot ends with the voiceover stating that “TV that’s missing stuff is evil” and that “Spectrum has it all”, and adding the company’s tagline, “DIRECTV bad. Spectrum good”.