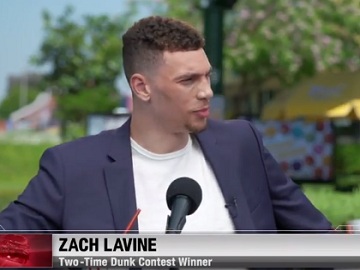 One of the spots included in the campaign, entitled “Highlights”, features the Chicago Bulls star and two-time Dunk Contest winner on a sports talk show hosted by Sonic spokesmen T.J. Jagodowski and Peter Grosz, which raises the question of who is a “better dunker”, Zack or Chicken.

The two, introducing Lavine as “one of the best dunkers in basketball”, ask the technical team to roll out his top 10 dunks, but actually on screen another type of dunking is shown, namely the dunking of Sonic’s Ultimate Chicken Sandwich into bourbon BBQ, buffalo and garlic parmesan sauces. When Lavine says that those are not his dunks, but sandwiches, Jagodowski says “Welcome to OUR house.” “That’s right, we live here.” – adds Grosz, making Lavine wanting to know if they live there, with the sandwiches. While Grosz answers he has a home, a wife and a child, his colleague reveals that he lives there, with the sandwiches.

The spot ends with the voiceover urging viewers to try the new Dunked Ultimate Chicken Sandwich in three bold flavors and get half-priced shakes and ice cream slushes after 8pm.