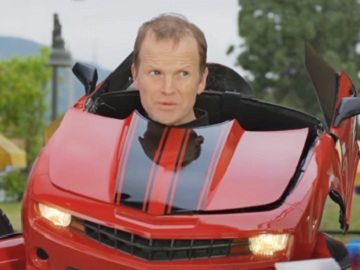 Sonic Drive-In has released a new commercial, urging viewers to try a new color-changing slush and enter the Transform Your Summer Sweepstakes for a chance to win a Camaro or a screening of Transformers: The Last Knight with 100 friends.

“Sonic is all on the two Transformers movie. Check out this Sweepstake prize and color-changing slushes” – says one of them to the other, who’s using a costume that can switch from a small red car to a robot suit.
“Human, I am all in, too”, answers the latter, standing up and transforming from a small car into a car robot.
“Oh, wow, you really are!”, exclaims his friend, saying that maybe he will win the trip to Paramount Studios.
“Oh, yeah, that would be great, but first I’m going to talk to her”, says the “Transformers” guy, looking at a distance and mentioning that he doesn’t refer to a red-haired woman, but to a little coupe with nice taillights.
“It’s a car, dude.”, states his friend, who receives a “Yeah, I know” in response.

The spot ends with the voiceover inviting you to enter the Transform Your Summer Sweepstakes with new color-changing slushes and see Transformers: The Last Knight coming in theaters June 21.