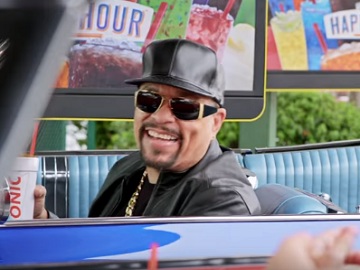 Aiming to highlight that the new Frozen Sweet Tea is better than Iced Tea, one of the spots, titled “Taste Good”, features the 59-year-old rapper and actor at a Sonic Drive-In sipping from a cup of Frozen Sweet Tea and saying “Damn, that taste good”.

Ice-T also stars alongside the duo T.J. Jagodowski and Peter Grosz, the passenger and the driver in Sonic ads, promotingbthe new frozen drinks.

SONIC’s frozen lemonades & limeades are available in a variety of flavors, including strawberry, blue raspberry, cherry, grape, and, of course, classic lemonade.

This is not the first time the American rapper stars in a commercial including lemonade and “Ice-T/Iced Tea”. In 2016, he appeared in a spot for GEICO, behind a lemonade stand run by children, screaming “No, it’s lemonade!” when people ask if it’s Ice-T.