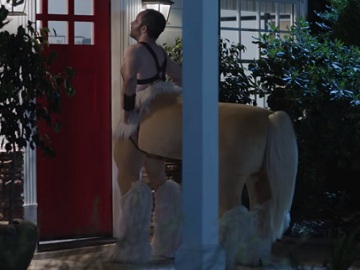 Snickers promotes the limited-edition NFL hunger bars in a series of new ads, urging you to “stay on your game” with these new bars.

One of the spots, titled “Fantasy Night”, features a guy showing up at a friend’s house, for a fantasy draft, costumed as a centaur (a creature with the upper body of a human and the lower body of a horse). Seeing his fellows dressed with regular clothes, he realizes he got his fantasies mixed up and decides to leave, without entering not even for a few minutes. As he turns around, he has the impression that the guys still standing at the door said something behind his back and asks them if they did, but they just shake their heads to say “No”.

The spot ends with the onscreen line “You’re off your game when you’re hungry” and with a limited-edition NFL bar carrying some of the texts available as response to the question “Who are you when you’re hungry?”, such as “False Start” and “Fumbled”. The voiceover then adds the brand’s tagline, “Snickers Satisfies”.