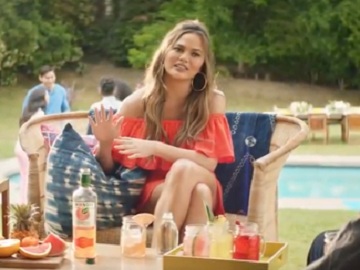 The global brand of vodka recommends you to add soda to any of its gluten free Smirnoff Sourced flavors and enjoy.
Chrissy Teigen teamed up with Smirnoff earlier this year, in March, and starred in several commercials. In one of them, she drinks the brand’s vodka from a plastic cup, during a night-out with her mother, and in another one she drinks the brand’s vodka while eating a burrito. In a more recent one, she states she drinks Smirnoff because it’s a “great tasting vodka, without any of the nonsense”.