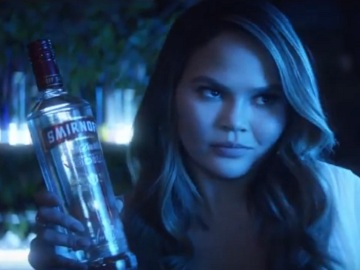 Chrissy Teigen stars in a series of new commercials for Smirnoff, promoting the brand’s varieties.

The 31-year-old model, who announced her partnership with the global brand of vodka earlier this year, on March 24, says, in the latest commercial, that she doesn’t drink expensive vodka. Holding a bottle of Smirnoff, she walks around through what it is revealed to be a backyard, where a pool party is on, and says “Let’s be real: Smirnoff makes great tasting vodka, without any of the nonsense, like velvet ropes, three-foot-tall frosted bottles, sexy robots, spark letters, ice sculptures, VIP sections”.

The spot ends with her speech becoming background lower noise, while the voiceover says that Smirnoff is “The most awarded brand in vodka over the past decade” and “Made in America”. The brand’s tagline, “Only the best for everyone” also appears on screen.

This is not the first ad Teigen stars in. The brand’s new campaign debuted two months ago with a spot in which she’s having a mother-daughter moment with her own mom, Vilailuck, and she’s drinking Smirnoff from a red Solo cup, not from a fancy glass. She uses a fancier glass, though, for a mouthful of vodka in another spot, while indulging herself with a burrito.