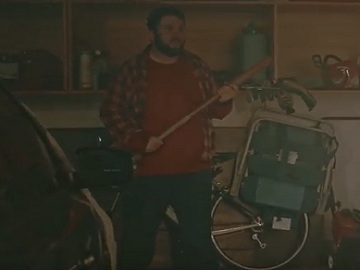 The 30-second spot, titled “Zombies”, features two guys entering a storage in their attempt to escape a bunch of
zombies chasing them. While on them is holding the door, so that the monsters couldn’t enter, the other one is supposed to bring something to put in the door. The latter is advised by his fellow to take a baseball bat, some clubs and, finally, a chainsaw, but he starts finding excuses for not using any of those tools. He says, for instance, that he never really played much baseball and that those clubs are left-handed.

When a zombie manages to enter and kill his friend, the guy remembers he is left-handed and realizes that one is on him.

“If you can get this picky about your survival tools, why not get picky about your TV?” – the voiceover asks at the end of the spot, adding that A La Carte TV from Sling is starting from $20/month. An onscreen line informs that seven days are for free, with the mention that, after seven days, your card is charged unless you cancel.