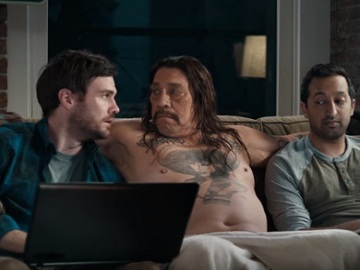 Danny Trejo stars in a new commercial for Sling TV, promoting the company’s A La Carte TV, which enables users to personalize their channel lineup and save money.

The 30-second spot features three guys trying to pick a holiday destination for a bachelor party, but it proves to be quite hard to make a decision, as the future groom (and not only him) is picky. He doesn’t want to go, for instance, in a place where there’s sand, because “that stuff gets everywhere”. As the trio discuss the possibilities, Trejo, who plays the role of a roommate, shows up in a towel from the shower and says, loud and clear, what it is that he wants for the getaway weekend: “an octagon for fighting”. “If you get picky with your bro’s weekend, why not get picky with your TV?” – asks Trejo looking straight to the camera.

The spot ends with the voiceover introducing A La Carte TV, only from Sling, starting at $20/month. This enables you to customize with Extras like Sports, Comedy, Kids, News, Movies, Lifestyle & Spanish TV, and change your services whenever you want. Sling highlights there are “no useless channels, no long-term contracts, no hidden fees, and easy online cancellation”, and that you can stream on your TV and mobile devices anytime, anywhere. Moreover, now you have the chance to watch for 7 days free.

Trejo, famous for having played Machete, has appeared in numerous films, including Heat, Con Air, Desperado, Anaconda, Once Upon a Time in Mexico, Urban Justice, Bad Ass, and TV shows such as Breaking Bad, Desperate Housewives, The X-Files, and Sons of Anarchy. He started working with Sling TV in 2016, starring in several ads.