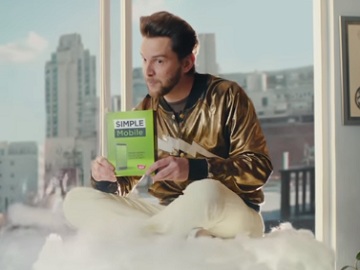 Simple Mobile’s latest commercial conveys the message that it gives you “truly unlimited high-speed data that moves as fast as a lightning cheetah” for only $50/month.

The 30-second spot features a young woman (Keylee Koop) telling her boyfriend (Matthew Figueira) about the text message she’s received from her wireless company, saying that they will slow down her data. At this point, a man on a cloud (Dustin Sterling) shows up at her window and enters the apartment, saying to the “fellow streamers” that Simple Mobile gives them “truly unlimited high-speed data on a blazing fast 4G LTE network”, and mentioning that her data would move “as fast as a lightning cheetah” if she switched.

The spot ends with the voiceover urging you to get “truly unlimited high-speed data” for $50/month and the latest smartphones, and adding “Want better wireless? The answer is simple”.