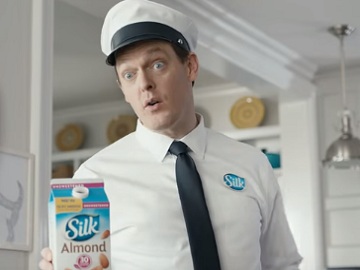 Silk, the brand of dairy-substitute products owned by DanoneWave promotes, in a new ad, the Unsweetened Silk
Almond Milk.

The 30-second spot features a family having breakfast in their kitchen, with the father pouring milk over his cereals, and the SIlk Man barging in, screaming and throwing away the man’s carton of milk, arguing that the respective milk has sugar. He then urges the man to try the unsweetened Silk Almond Milk, which “has zero grams of sugar and a tasty new taste”. The latter tries it and says he loves it, but this doesn’t surprise the Silk Man.

Shortly after, the family’s dog shows up in the kitchen and begins to lick the milk on floor. Silk Man begins to give – again – his speech about that milk containing sugar, ready to encourage also the dog to try the Silk Almond Milk.

“Silk – Tastes Like Better” – the voiceover says at the end of the spot.