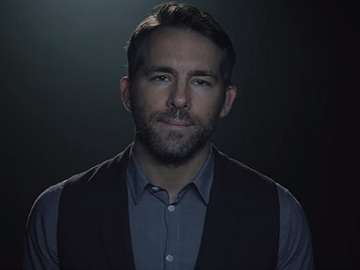 Ryan Reynolds stars in the VS campaign of SickKids, Canada’s most research-intensive hospital and the largest centre dedicated to improving children’s health in the country, delivering a powerful message and urging viewers to join the fight.

“This battle began in 1875. Sick kids have been fighting in for the last hundred and forty two years. An epic crusade against childhood illness, trauma, and disease. The front lines are advancing. We’re winning. Cystic fibrosis is on the run, heart disease is retreating, cancer is giving up ground.” – the Hollywood actor says standing tall in a dark room and looking into the camera, under a spotlight. “We aren’t there yet. There are a lot of battles left to fight. We can’t afford to lose a single one. Join us.” – he ads. At this point, a light is turned on and a big group of hospital staff is shown standing behind him.

The 45-second spot has been created by advertising agency Cossette Canada and the soundtrack music was done by
Sndwrx.

Reynolds decided to team up with the Hospital for Sick Children after meeting SickKids patient Grace Bowen (9) at Canada’s Walk Of Fame in 2014.

Previous: Rabobank Commercial: Growing a Better World Together
Next: River Island Anne-Marie Advert: I Am With River Island