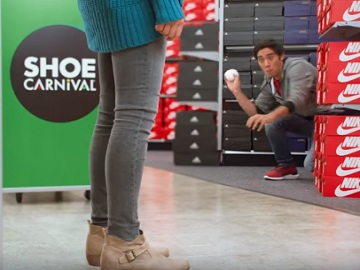 LA-based YouTube personality Zach King encourages people to surprise themselves this holiday in the latest Shoe Carnival commercial, promoting the retailer’s offers, which include boots starting at $24.98 and 1/2 off deals.

Titled “Snowball Surprise”, the 15-second ad stars King (mostly known for his “magic vines”, which are videos digitally edited to look as if he is doing magic) showing up in a Shoe Carnival store and throwing some of his merry magic into the mix. He grabs some snow from the picture of a snow-covered mountain and, after doing a snowball, throws it towards a potential customer. Touching her, the snowball turns into a pair of boots.

“Put YOU on your list with boots starting at $24.98. Plus buy one get one 1/2 off. Shoe Carnival. A surprise in store.” – the voiceover says at the end of the spot.