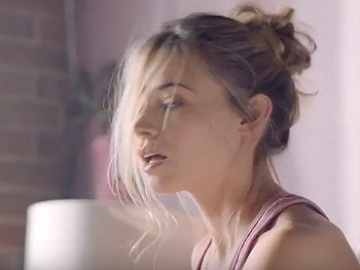 The brand of personal care and safety razors owned by Edgewell Personal Care Shick promotes, in a new commercial,
the Schick Intuition, described as the first razor system that lathers and moisturizes during shaving in one easy step, without shave gel.

The 30-second spot, titled “Overslept”, features a young woman who wakes up after receiving a text message from her boyfriend, informing her that he’s on his way to her apartment and that he’s bringing his mom for a visit. She then starts to shave effortlessly with the Schick Intuition razor and do, in the meantime, some cleaning, meaning hiding an empty pizza box under the sofa, several pairs of high heels in the dishwasher, and cramming clothes into the wardrobe. Eventually, she puts on a mini skirt and is ready in time to receive her guests.

The commercial ends with the voiceover urging you to “free your skin”, which is the campaign tagline.

The woman starring in the ad is American actress and pro dancer Tyne Stecklein (28), who participated at the Dancing With the Stars Season 17 as the partner of Bill Nye The Science Guy’s DWTS. She also danced in the movies The Curious Case of Benjamin Button, Step Brothers, and High School Musical 2, and appeared in two episodes of True Blood in 2012. She has starred also in music videos (for Christina Aguilera, Gym Class Heroes, and OneRepublic) and commercials (for Adidas and Old Navy).