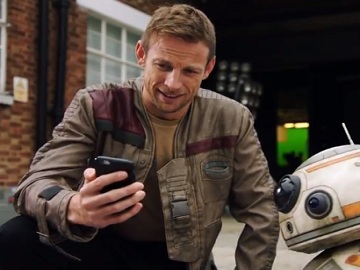 Santander UK has launched a new advert inviting people to join Force for Good community and help raise £250k for Barnardo’s and Together For Short Lives.

The spot, which also promotes the release of Star Wars: The Last Jedi in the UK on December 14th and invites viewers to send their homemade Star Wars clips, features English actor Warwick Davis video-calling F1 star Jenson Button and asking him what he thinks of his BB-8. He is then seen wearing a Darth Vader full face mask telling Button “Join me and together we’ll rule the Galaxy!” and then a Princess Leia wig, asking the racing driver is this is better. “Help me, Jenson Button, you’re my only hope!” – Davis says using a changed voice, aiming to express helplessness.

At the end of the spot, Button is seen asking BB-8, who’s been with him this whole time and said a big “No” to Davis’ last question, to follow him.

The British bank, wholly owned by the Spanish Santander Group, will donate to children’s charities for every clip
created and uploaded. In addition, those who share their own Star Wars-themed clip or picture have the chance to win prizes too. The Grand Prize consists in a holiday for a family of four (or two adults) to the Wild Atlantic Way and Skellig Island in Ireland (the iconic location Luke Skywalker at the end of Star Wars: The Force Awakens), staying at a 4-star bed and breakfast in Portmagee, a day on a guided Star Wars experience exploring the iconic Star Wars: The Last Jedi filming locations on Skellig Island and the Ring of Kerry, a stay for a night in a 4-star hotel in Dublin, where you’ll have the chance to create your very own Star Wars stuffed bear, and a trip at the Disney Store, where you’ll be able to spend €200 Euros (money included in the prize) for a Star Wars: The Last Jedi.