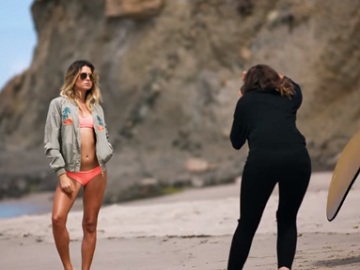 Samsung promotes the Galaxy Tab S3, in a new ad campaign titled “Do Anything”, aiming to inspire people to bring their ideas to life with “the 2-in-1 that lets you work any way you want”.

The campaign includes short films starring various persons that are using the Galaxy Tab S3 to put their passion projects front and center, such as Hawaiian post-pop artist Aaron Kai, known for his iconic waves and designer-founder Jessi Taylor, who put four years and $40K into her startup, Horizon Swimwear.

The latter, who’s been teamed up by Samsung with a few key players to turn her passion into a career, talks about her life, her struggle to do what she loves (she works at night because she has a full-time job), and about the first interview she’s ever given, to lifestyle media company Brit + Co.

With a host of new features and the brand’s most responsive, most pressure-sensitive and precise S Pen yet, which features a full palette of brush and pen types to help you plan any big project, and a detachable keyboard that pairs automatically and is easy to switch from touch to type, the Galaxy Tab S3 gives you everything you need to do anything, your way.