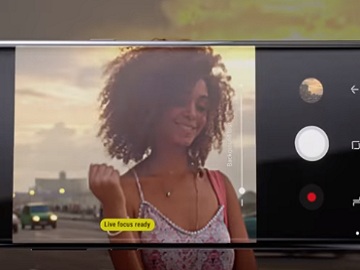 Samsung has released the official TV commercial for its recently launched Galaxy Note8, highlighting that “You can think small or you can do bigger things with the Galaxy Note8”.

“The phone that defined big just got bigger. It does viewing bigger. It captures bigger. It even does the little things bigger. You can think small or you can Do bigger things.” – is the message conveyed in the 30-second spot through onscreen lines alternating with captures of the new device.

The soundtrack music is the debut single “The Power” by the eight-piece band Sweet Spirit, founded by Austin singer Sabrina Ellis, from their 2017 album “St. Mojo”.

The Samsung Galaxy Note8 features the largest ever screen on a Note device (6.3″) and Infinity Display, a dual camera that supports 2x optical zoom for sharp photos or videos even from a distance, and optical image stabilization for steady shots even when zoomed in, and a range of devices that enable users to connect to a bigger world, such as Samsung DeX Station, Gear VR with controller, and Gear 360, which are sold separately, and Bixby.