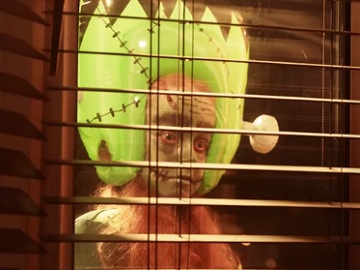 After having promoted its range of creepy costumes for this Halloween in the “Mwahahahaha!” ad, Sainsbury’s has released its “actual” Halloween advert.

The spot, titled “Your Halloween nightmare”, features a young couple who find themselves unprepared for the Halloween night, with no candies for the kids walking around the neighborhood. Without saying a word to each other, they decide to turn off all the lights in their house and pretend they’re not at home before the little ones get to their door. Unluckily, after all the lights are turned off, the woman’s cell phone rings, so she needs to crawl on the floor into the living room. In the meantime, her husband, who got down on his hands and knees, starts barking. They both continue to act like dogs on the floor until the kids leave. Their nightmare isn’t over, though. A kid hasn’t left and sees them through the window barking and “playing” with shoes and pillows.

The advert ends with the onscreen line “Scared you’re unprepared?” and the British supermarket chain’s tagline, “live well for less”.