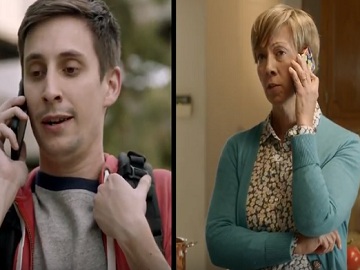 SafeAuto has launched a new ad campaign to inform people that they can save up to 25% on their car insurance in only three minutes.

One of the 30-second spots features the exchange of text messages between a mother (Nanci Burrows) and her teenage son, Gregory (Drew Hann), who’s not home yet for dinner. “Hey, Gregory. It’s Mom. When are you coming home?” – she asks, mentioning “there’s chili” and adding the hashtag #MOM. The boy texts her back to let her know that he’s “leaving in a sec” to go home, but, because of the autocorrect on his phone, he sends, multiple times (three, more precisely), the message “leaving in a sex”, which makes her mother “#DISAPPOINTED”.