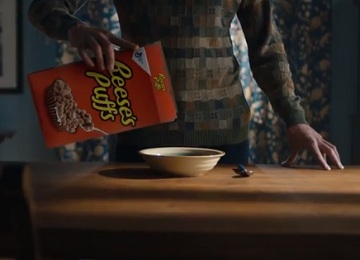 General Mills promotes its cereals in a new commercial, highlighting that “Good starts with G!”.

“Good starts with G. Great-tasting Whole Grains, pleased with genuine peanut butter. Yes, real cocoa, honey, and cinnamon, too.” – the voiceover says in the 15-second ad, which opens with a man pouring Reese’s Puffs cereals into a bowl, and continues with several persons enjoying a bowl of Reese’s Puffs in all kind of places, one of them having such a bowl, during a night walk, from a food trailer selling Reese’s Puffs.

At the end of the spot other cereals from General Mills are showcased, as well, including Honey Nut Cheerios, Cookie Crisp, Cocoa Puffs, and Cinnamon Toast Crunch, and the voiceover adds the tagline “Good starts with G”.