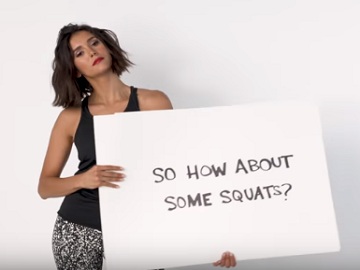 Reebok’s newest brand ambassador, Nina Dobrev, highlights that fitness is a way of life and encourages people to start working out everywhere, even while out of their normal routine, in a new commercial for the global athletic footwear and apparel.

Presented as a “Holiday PSA”, the spot features the 28-year-old actress, known for her role in the hit series “The
Vampire Diaries”, holding posters that convey the following message: “Finding time to work out during the holidays can be challenging. Especially when you’re catching up with friends and family and eating lots of turkey and pie. And pie. And eggnog. And more pie. Let’s challenge ourselves as a tribe to stay active even while out of our normal routine. Because, really, the gym is everywhere and fitness is not a habit. It’s a way of life”.

Nina, who’s seen giving meaningful looks and sending kisses as she delivers this message, also does squats and a push-up after showing the next posters, featuring the questions “So how about some squats? Or a press? Or a push-up? Are you in?”.

The actress was named the face of the Reebok x Les Mills collaborative partnership earlier this year, in July.

She, Les Mills and Reebok have co-created an exclusive LES MILLS GRIT cardio workout, that will be released in January 2018.