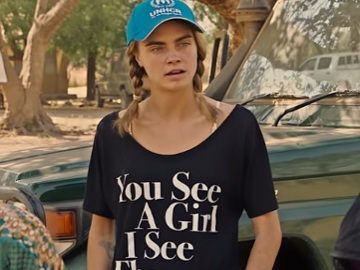 Cara Delevingne is encouraging women worldwide to share their stories, their struggles, their strengths, and their passions in a new Puma campaign, entitled “Do You Stories”.

Those who join the #DoYou movement – which can be done by sharing their own stories on social media using #DoYouStories – get the chance to spend a day with the English fashion model and actress.

In the commercial/trailer for #DoYouStories, Cara says she has spent the last few months talking to and being inspired by different groups of women doing things to change the world, adding that she wants to see what viewers are doing to change the world, to inspire each other, to lift each other up. The model urges them to post their photos and videos with the hashtag DoYouStories, mentioning that she will select 10 of them to meet with her.

The first episode from the series sees Cara visiting several refugee camps with the UNHCR and Puma in Uganda, a trip which she describes as “one of the most incredible experiences she’s ever had in her life” and
“life-changing”.

The other three episodes released by Puma feature Cara writing poetry with the women from Get Lit, a program that works to increase literacy, empowerment, and self-expression through writing, taking a self-defense class with Martial Smarts, where women learn how to physically strengthen and defend themselves against violence, and speaking with two survivors of bullying who are working to support victims and educate to prevent bullying.