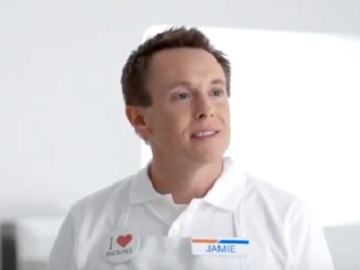 Progressive has released a new commercial, promoting its Name Your Price tool, that provides customers with coverage options based on their budget.

The 30-second spot, created by agency Arnold and titled “Tool Room”, features two Progressive employees having a conversation that becomes more and more frustrating for one of them, named Jamie. The latter approaches his coworker, who was just ending a small talk with someone. Not recognized, he introduces himself, but the guy says he is not “good with names”. However, he does say a lot of names as other employees are passing by. He clearly remembers Celeste, Cruz, and others, but not Jamie, the one who trained him and shared a locker with and the one who coined the phrase “We give you coverage options based on your budget” related to the company’s Name Your Price tool.

When he finally says “Jamie”, Jamie thinks that he remembered, but actually he greets a young woman who returned from Italy.