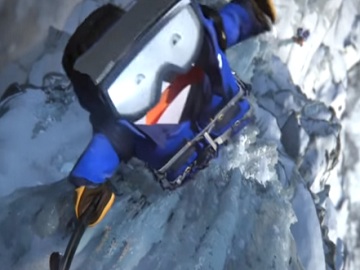 The Box takes discounts to new and surprising heights in his climb to the summit in the latest Progressive Insurance commercial, done by Arnold agency, highlighting that you could save an average of $620 on auto insurance when you switch to Progressive.

The 30-second spot, titled “The Climb”, features the Progressive Box climbing a snow covered mountain, facing strong head winds that don’t let him take a selfie. As the voiceover (Chris Parnell), who mentions the savings you could enjoy by switching to Progressive, says that “the prize at the top is worth every last breath”, the ad reveals that, actually, the Box was “climbing” a freezer to grab frozen waffles off the top shelf.
Unluckily for him, he discovers they are whole wheat, which makes him cry.

Actor Chris Parnell gives voice to The Box since its introduction by the insurance company, in 2012.