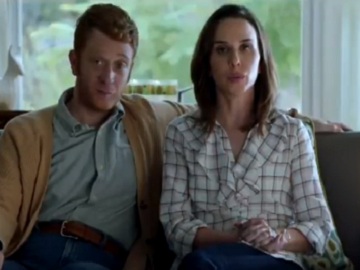 Progressive Insurance has launched a new commercial featuring another “parentamorphosis” case. This time, a woman sees her husband turning into his mother after they buy a house.

The spot, titled “Doppledinner”, features the couple talking to the camera about their issue. “I saw the change in Rick when we moved into the new house, but having his parents over was enlightening.” – the woman says and a series of scenes showing her husband and his mother react in various situations follows. Thus, we see Rick like a sort of male doppelganger of his mom: he’s wearing the same type of clothes she’s wearing, in the same color, he’s asking his wife if she doesn’t like the meal he has prepared if he notices that she doesn’t eat too much, he’s sitting on the couch in the same position like she is and is laughing like her. Finally, the man is seen in front of the computer, with a pair of eyeglasses on, just like hers, telling his mother, who’s standing behind him, that “it’s so easy to get home insurance on progressive.com”.

“Progressive can’t save you from becoming your parents, but we can save you money when you bundle Home and Auto.” – the voiceover says at the end of the spot.

The campaign, focusing on the changes that occur after people buy a home, causing thim somehow to become more like their parents, was described by a chief marketing officer at Progressive as “an ode to your parents”, mentioning that “it’s not making fun of your parents”.