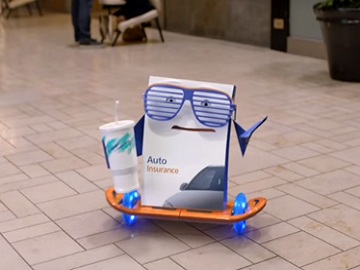 Progressive Insurance continues its ad campaign highlighting that you could save nearly $600 on auto insurance with a new commercial featuring The Box. This time, the company’s mascot, voiced by Chris Parnell is at the mall, helping people save money, of course.

“I make it easy to save $600 on car insurance, so being huuu comes naturally.” – says The Box while riding a segway among people, at the mall. Arrived at a place called “Pretzel Prince”, where a guy is selling pretzels, The Box says he can’t decide if that place is “swag or bling” and the seller answers “It’s pretzels”. The talking box then approaches three teenage girls, telling them: “Ladies, you know when you switch you get my bomb diggity discounts automatically” in a playful voice, trying to be cool, but it doesn’t succeed, as they look at him confused, as if they didn’t understand a word.

At this point, a security guard on a segway calls The Box to let him know he forgot its umbrella, but the latter tells him to keep it. “You’re gonna need it when I make it precipitate.” – adds The Box, leaving the security officer speechless.