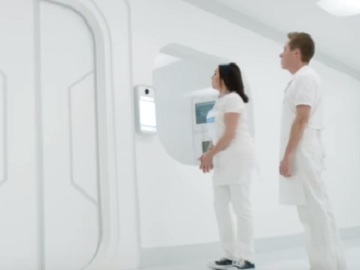 The 30-second spot features the company’s fictional salesperson character, portrayed by Stephanie Courtney,
walking on a large corridor in the company of a new employee, Jamie, telling him that they are about to see Progressive’s new Homequote Explorer, where he can compare multiple quote options online choose what’s right for him. Arriving in front of a closed door, Flo requests entry for her and the new guy and then, seeing that the door remains closed, starts saying possible passcodes, from Slovakia, triceratops and tapioca to racquetball, pumpernickel, and others.

At some point, another employee passes by them, greets them with “Hey, guys!” and then enters the Homequote Explorer room by pushing the door.

The spot ends with the voiceover saying “Homequote Explorer – It’s home insurance made easy” and with Jamie concluding that the password is “Hey guys”.