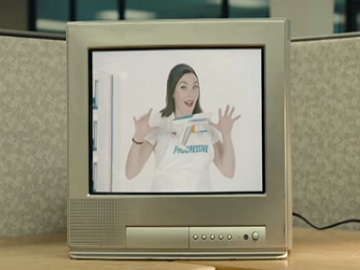 Progressive has launched a new commercial to promote its Name Your Price tool.

The 30-second spot features Bill and Tom, two middle-aged employees at an insurance company, having an existential crisis while Flo – seen on a monitor – says that Progressive gives its customers options based on their budget.

“Do you ever feel like cliche foil characters scheming against the top insurer for no reason?” – one of them asks the other.
“So…why we don’t like Flo?” – the other one asks in response.
“She has the name of your price tool and we want it.” – answers the first one.
“But why?” – comes the next question from the other one.
At this point, a series of “existential” crisis questions are asked by his coworker and Flo.
“Why don’t we actually do any work?”, “Why do you only own one suit?” (this is Flo’s question).
The answer: “It’s just the way it is, under developed office character.”
“You’re right, thanks, Bill.” – answers the one having a snack, who asked “But why?”.
“You know, you’re Bill, I’m Tom.” – Tom reminds Bill.
“You know what, no one cares.” – says one of them.

Progressive has been promoting its competitive advantage through allowing consumers to set prices in several other commercials starring Flo (and celebrity guests, at times), with the tagline “Name Your Price”.