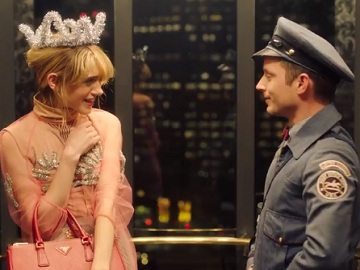 Prada has released the fourth and final installment in the short movie series “The Postman Dreams 2”, showcasing the brand’s Galleria Bag.

Titled “The Elevator”, the film sees Elijah Wood reprising his role as “The Postman”, who must deliver this time his final package to Natalia Dyer. He is seen taking an elevator to the 25th floor and following Natalia back in the elevator to hand her over the gift. His apparently simple mission becomes a real challenge as, on its way down, the elevator becomes populated by a variety of characters stopping the postman from saying what he has to say. When he finally manages to give Natalia the Prada Galleria Bag, a shout of excitement is heard. “It’s amazing!” – Natalia says, while the witnesses to this “event” are applauding. When one of the latter, a nerd, asks the Postman if he can have the box, the Postman doesn’t know what to answer at first, but then says “Sure”. Immediately after, Natalia gets out of the elevator, as well, and says “Thank you, Mr. Postman” before starting to strut on the hallway. Finally, the Postman is seen going down and leaving the building.