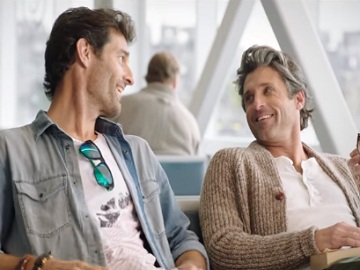 Porsche has released a hilarious new commercial starring Patrick Dempsey and Mark Webber, aiming to highlight that
those who were once race drivers are always race drivers.

The 90-second film features Dempsey and Webber as retired racers, during a casual encounter in an airport. Apparently, they have retired from racing, after years of stress with strategy, telemetry, teammates and pit stops, to live a life far away from fast cars, racetracks and competition. “I like taking the time, I don’t like to rush. Just smooth. Easygoing” – Dempsey tells Webber, but images of him in the airport minutes before they met reveal the opposite. He is seen running on the hallways while pushing the luggage cart, stumbling, falling, getting up and continuing his “race” to the boarding gate.

Webber brings into conversation Porsche, saying that “Germans are pushing hard.”, and Dempsey agrees, answering that “you can’t relax”. Webber then reveals that for him it (being a race driver) was “stressful” and lists the stress factors, including “strategy, telemetry, teammates, and pit stops”, but images of him minutes before also prove the opposite. “Race is just gone for me now, it’s just gone.” – he adds.

The next moment, their names are mentioned in a final boarding call, the two passengers being asked to proceed to their gate immediately. “So good those competition days are over.” – Webber says while handing over his boarding pass, after they have raced to the gate like sprinters. “Absolutely!” – Dempsey agrees, gasping after his run.

“You never really retire from what you love.” – a final onscreen line reads before footage images of Dempsey and Webber on the racing track at the wheel of racing cars and celebrating their victories are seen. The two buddies are shown again, getting out of the Monza airport, and wishing to each other “Happy holiday” and “Good retirement”. They go then in different directions, but meet again, each at the wheel of a Porsche. What follows is easy to imagine. The two Porsche models showcased at the end of the film are 911 Carrera GTS Cabriolet and 911 Carrera 4 GTS Cabriolet.