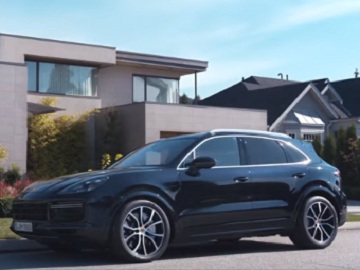 Porsche showcases the new Porsche Cayenne in a hilarious new commercial, highlighting “There can never be enough
excuses to sportscar together in the new Cayenne”.

The 60-second spot features two teenagers – a boy and a girl – playing basketball in his front-yard. When his dad comes home, in his Porsche Cayenne, the boy asks him if they could give Lisa a ride home. He stops for an instant, as if he needs to think about it and then, realizing his son has a crush on Lisa and wants to impress her, the man agrees and, with the two peers in the back seat, he drives through the city and even outside the city, speeding down the road and making the girl accidentally touch his son’s hand.

As the spot comes to an end, it turns out that the girl, who says “Thanks for the ride” once she’s in front of her
house, was the boy’s neighbor. Finally, the voiceover says “The new Porsche Cayenne – There’s nothing like the feeling when you sportscar together”.